I’ve had my Super Chromega D Dichroic II for over twenty years and have never paid much attention to the light mixing chamber that sits above the negative carrier.  I don’t print color, so the change in light color from long term yellowing has never caused me much grief.  Lately, though, I’ve noticed that I am not getting even light distribution across the entire negative area when I print 35mm and it could be even worse with larger negative sizes.

I noticed that the central area of the diffusion screen on the bottom of the mixing chamber has become quite glossy in the center and tests have shown that it reflects the negative.  Well, actually, it reflects the white negative carrier which results in a band of brighter light around the outside edges of he 35mm frame.  I was able to remedy the problem by covering the diffuser with dull finish diffusion material (like the diffusion material used on studio lights) or by covering the top of the negative carrier with black paper.

Nonetheless, the diffuser and lining of the mixing chamber had become yellowed and the shiny spot in the center made me think it needed to be replaced.  Luckily, Omega sells a relining kit that can be purchased through B&H for $98.50.  I ordered it and it came this week. 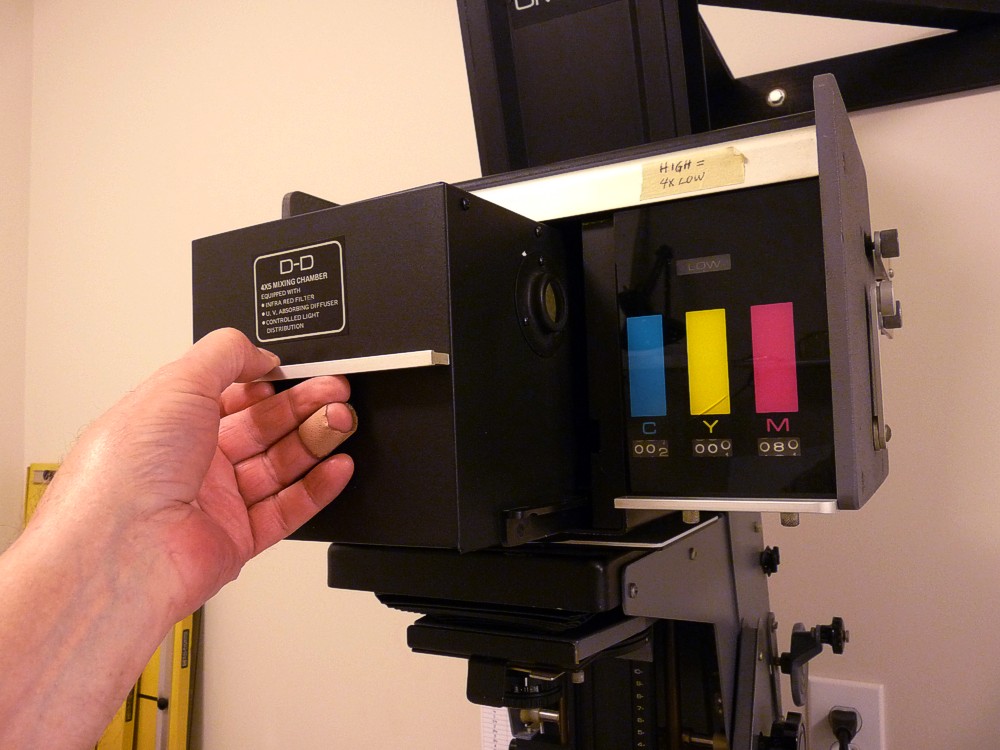 The mixer is accessible by removing the front door of the Chromega lamp house. 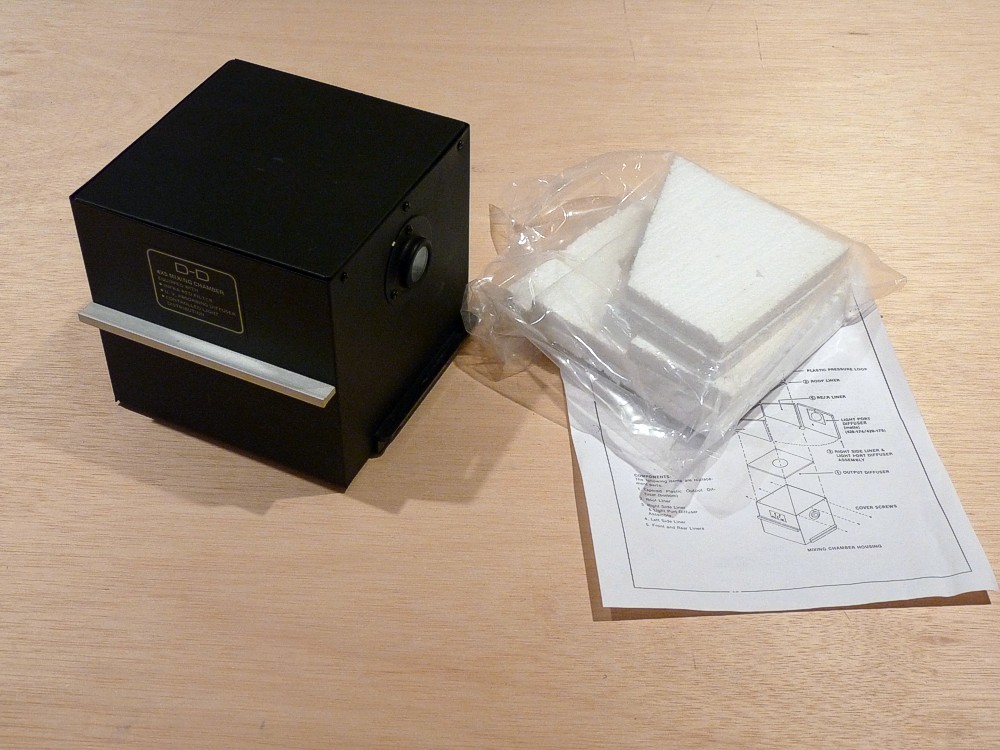 The lining kit includes the foam pieces, diffuser, and instructions.

First, remove the six screws that hold the top on.

You may need to pry the top off using a small screwdriver at the corner. 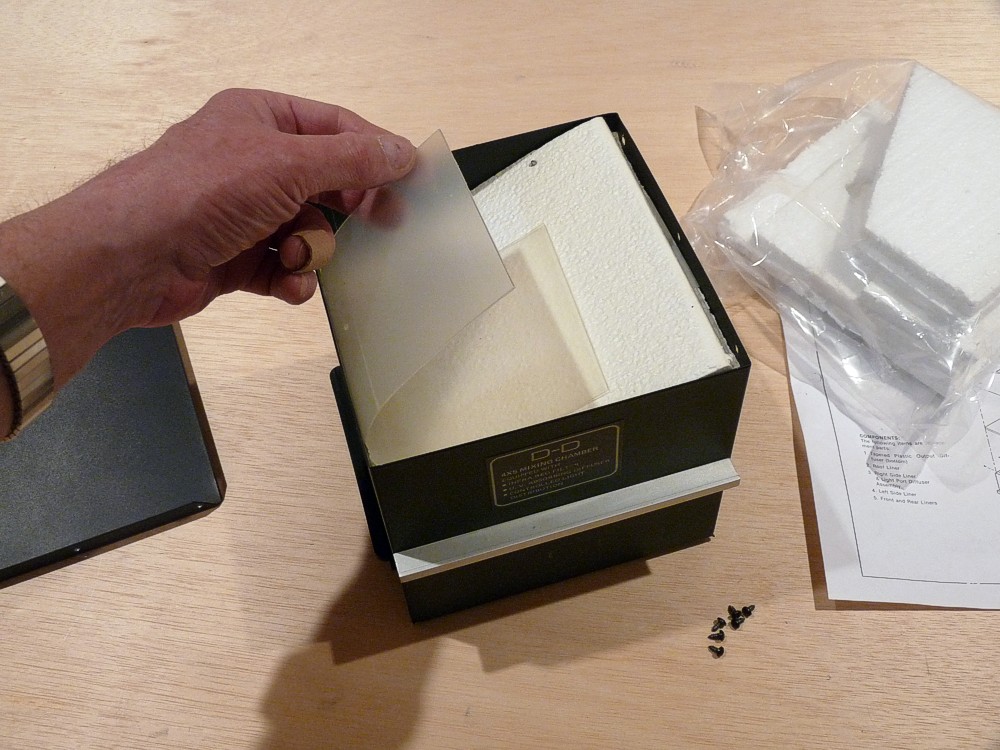 Save the springy plastic “pressure loop”. It will be reused. 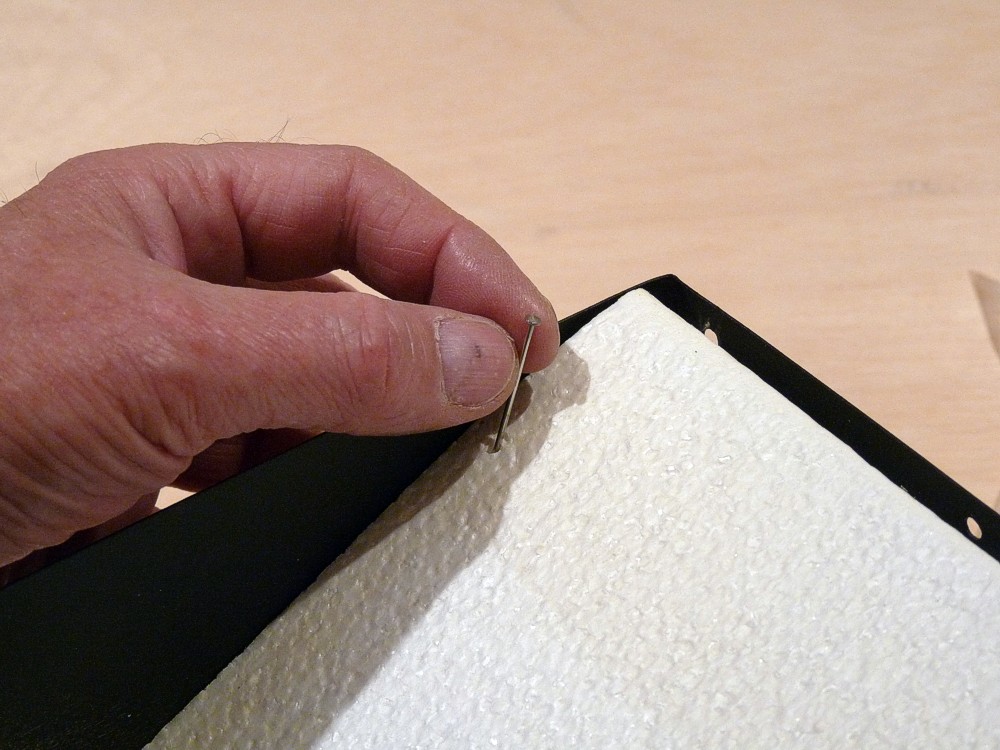 Remove the long pins that hold the top foam piece on.

Next remove the tight fitting front and back pieces. 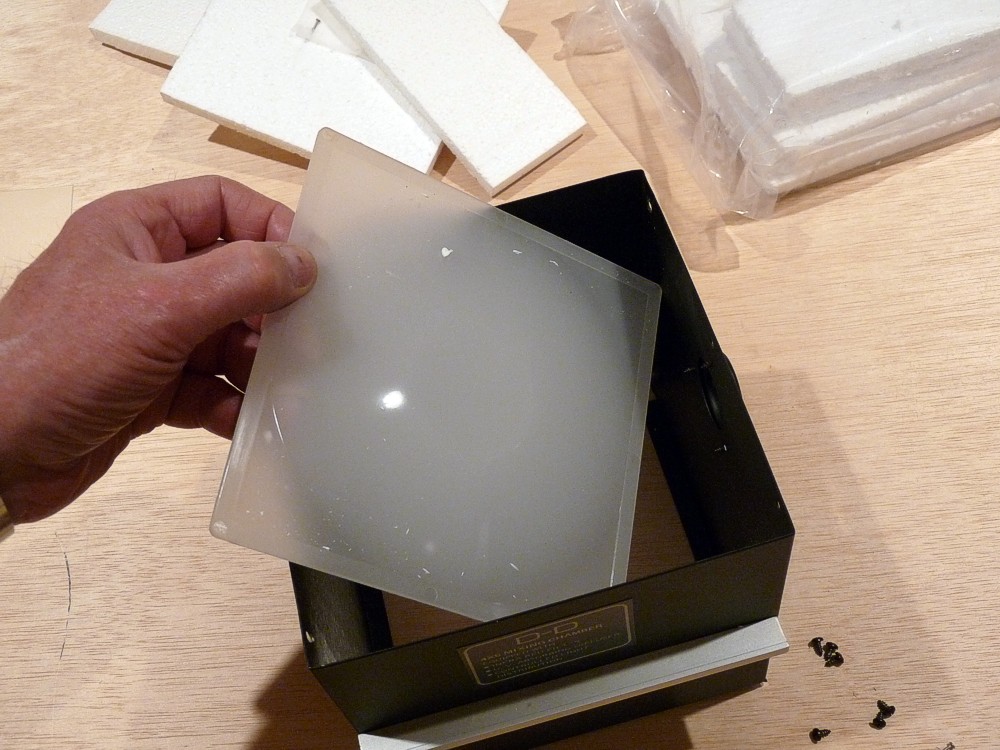 The output diffuser can be removed by pushing up from the bottom. 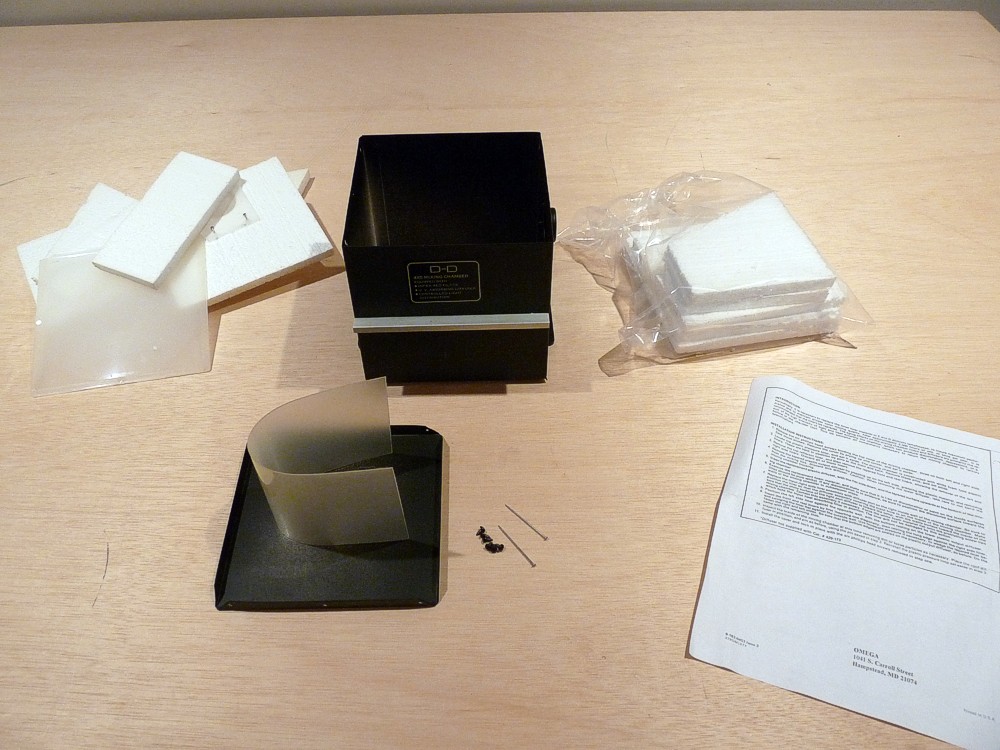 The old liner is on the left and the new kit is on the right. 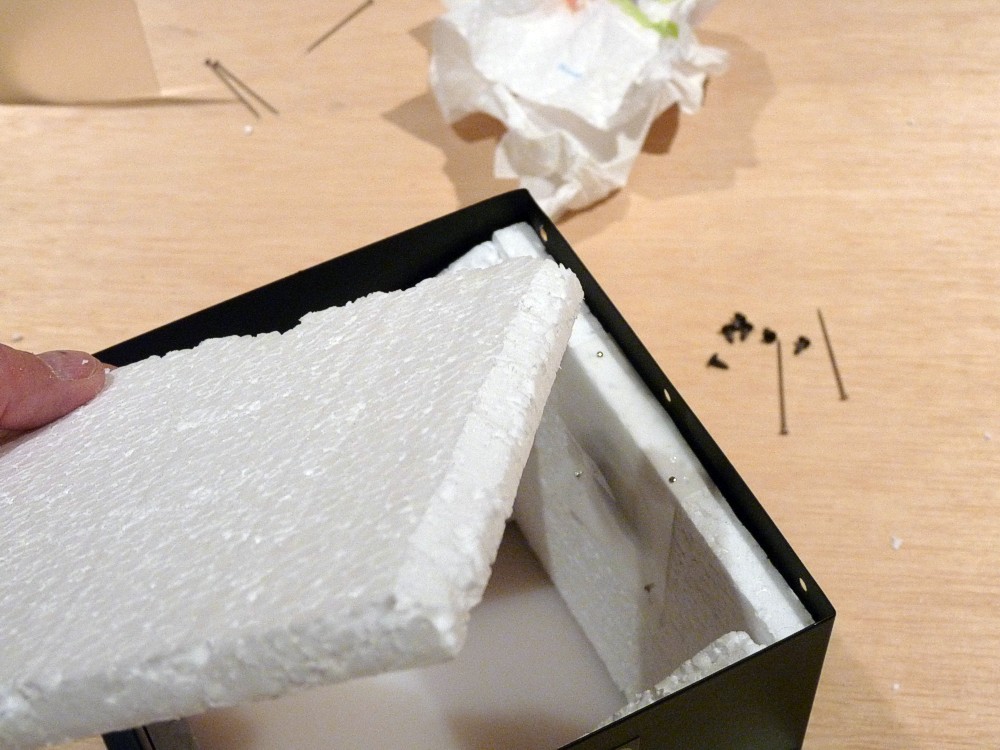 I used a razor blade to bevel the upper edge of the top foam piece. 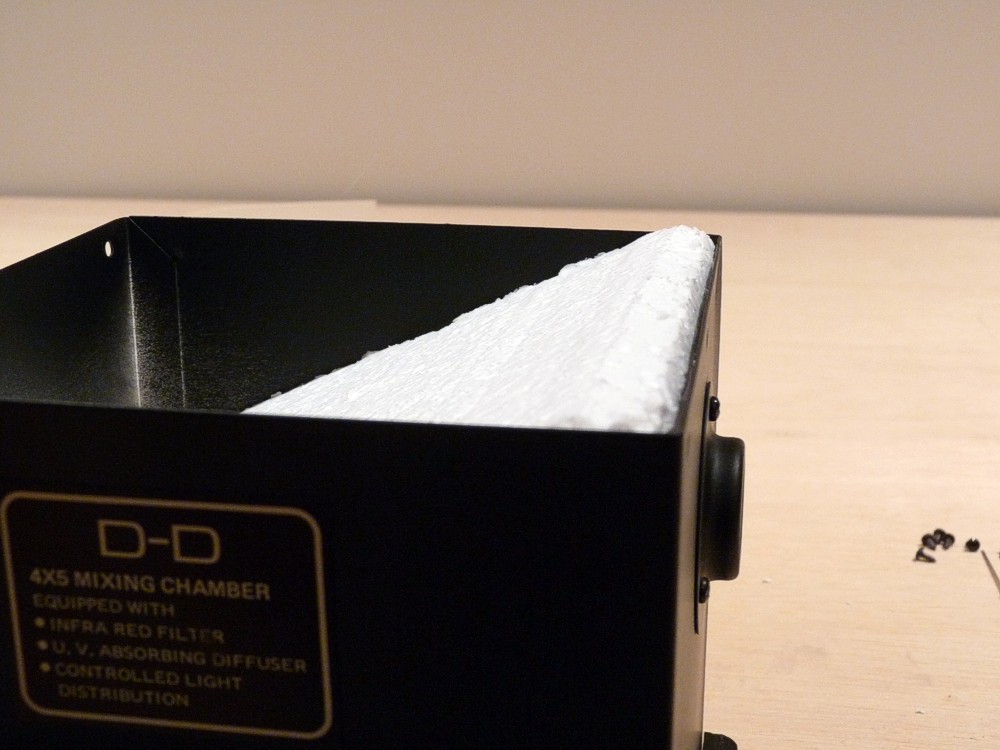 The bevelling of the upper edge eliminates interference with the cover.

Install the long pins to hold the top foam in place. 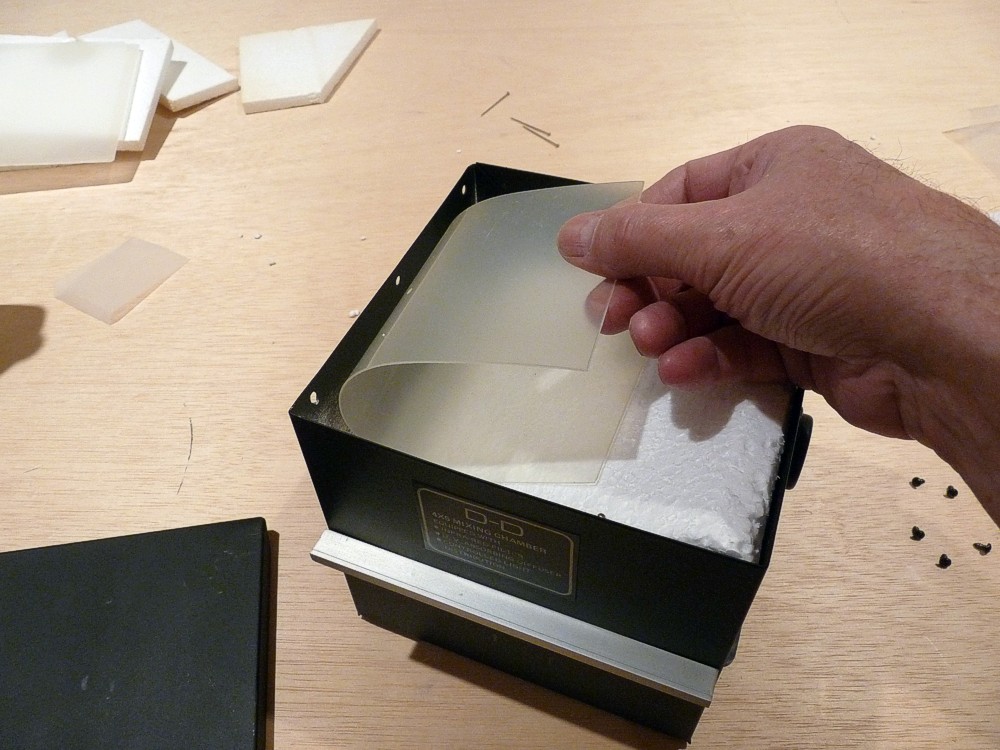 Finally, install the cover and secure it with the six screws. Be careful not to over tighten the screws.

I noticed the new output diffuser has a glossy surface on the bottom and a matt finish on the top, opposite from the old one.  This is problematic because the glossy surface reflects the white edges of the negative carrier resulting in uneven lighting of the negative.  As noted above, the reflection can be eliminated by covering the diffuser with a piece of dull diffusion material or by covering the negative carrier with black paper.  I intend to use the latter option, except I will paint the negative carrier black.  I sometimes use Ilford Variable Contrast filters under the mixing chamber and, since they are glossy, they would present the same issue as the glossy diffuser.  Making the 35mm negative carrier black will reduce the light output, but  that suits me fine since I often find myself having to use neutral density filtration to get long enough exposure times with faster papers such as Adorama RC.

Unfortunately, I neglected to make a color temp reading of the light output before relining the chamber, but the light looks whiter.  I wouldn’t be surprised if my prints showed slightly higher contrast for the same filtration due to the replacement of the old yellowed liner.

If you want to test the light distribution of your enlarger, just make a high contrast print (max magenta filtering or a #5 VC filter) without a negative in the carrier.  Ideally, the print should be a uniform gray tone from corner to corner.  If you see light fall-off toward the corners, you might try using a lens made for a larger format.  For example, I get more even light distribution using my Nikkor 80mm lens than I do with my Nikkor 50mm lens.